Recently the fast food tycoon McDonald’s came out with some brand new breakfast items. Featured on their McCafe menu are three new bakery items. Blueberry Muffins, Cinnamon Rolls, and Apple Fritters. As someone who loves breakfast, and anything baked, I wanted to try these foods and see how good they were.

McDonald’s  recommends all of these served with their signature coffee, but I don’t drink coffee so that doesn’t matter to me. I actually drank almond milk with it and it was fine. (Why almond milk? I’m lactose-intolerant. I know what you’re thinking, “allergic to milk and chocolate? This girl must be fun at parties” And I am fun at parties! But parties aren’t always fun for me.)

Before we get into the review I just wanted a small disclaimer: I was not sponsored to do this. I know that one may think that an author as famous as me, writing for a newspaper as big as Davis High News may be sponsored, but I am not. This is all my own opinion, not at all influenced by the fact that the cashier gave me an almost 50% discount when I bought some of the items. (Be nice to fast-food workers during rush hour, kids) But seriously, this is just my opinion and not fact or sponsored.

For the review, I will first go into the taste, and any limitations or modifications that come with the item. Then I will rank it out of 10, and finally tell you how likely I am to order it again.

First, let’s start off with the Apple Fritter. This item is made to primarily taste like apples and cinnamon. It’s a fried item and covered with a “sweet glaze icing.” It’s 510 calories, and although it is apple flavored, I couldn’t find any real apples in there so, take that with what you will. 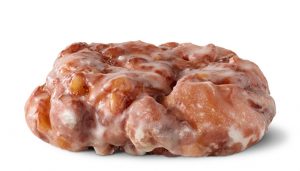 Honestly, I ate this when it first came out and it was kind of gross. It’s fried so it was kind of greasy, and it was also super sweet. I ate it cold though, so that could be why. When I tried it again I warmed it up this time and the taste improved by a lot. It was less greasy tasting and honestly just tasted like a donut. Which is basically what it is, a glazed, apple-cinnamon donut. I actually liked it quite a bit warm. So if you end up getting it, make sure to either ask for it warm or have an accessible microwave to warm it up.

I would have to rank this a 2/10 cold, and 6/10 warm. 4/10 overall. I’m not a huge fried food fiend, you know? It was good (once I warmed it up), but it wasn’t the best thing in the world. I may order this again, but only if I was craving it, or if I could actually get it warm and with some ice cream.

Next, let’s talk about the new Blueberry Muffin. This muffin is a pretty normal muffin, made with real blueberries and a streusel topping. It’s around 470 calories, and from looks alone it looks to be the best out of the new items. 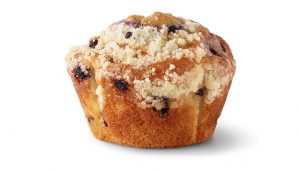 I actually loved this. It wasn’t too sweet, and tasted pretty good. That being said, the blueberries may have once been real, but the ones in my muffin were more like the ones you get in the muffin mix packages at the store. They tasted fine though, and if you were expecting fresh blueberries in a fast-food muffin, then you will pretty much always be upset, my friend. The streusel topping was just sprinkled on top, so if you are a huge streusel fan, then you may be disappointed. There wasn’t very much. I ate mine warm with butter spread in the middle, and it tasted pretty good.

I give this a 8/10. It tasted really good with the butter, but I had to add that. Honestly, it surprised me. I didn’t think that a fast food muffin would taste that good. I wasn’t expecting it to taste bad, but not that good. I’d probably order this again for breakfast, or if I just wanted something sweet.

Finally, what we have all been waiting for: the Cinnamon Roll. I love Cinnamon Rolls. They have always been a holiday staple at my house, so I was excited to try it. The Cinnamon Roll is approximately 560 calories, and is made of buttery, flakey dough, layered with cinnamon and drizzled with cream cheese icing. 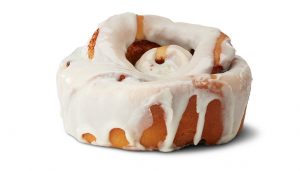 Honestly, in comparison to Cinnabon, or even the frozen cinnamon rolls at Bowman’s, McDonald’s Cinnamon Rolls aren’t that good. But if you are craving a cinnamon roll and McDonalds is closer than a Cinnabon, then it works. They’re good enough to order if you are there, and in the mood, but not amazing enough to go out of your way to get one.

I’d give it a 6/10. It was good and better than I expected but it wasn’t great, and I’d honestly rather just get a pack of  frozen cinnamon rolls and bake them myself. If I were in the mood for a cinnamon roll, far away from a bakery or Cinnabon and didn’t have an oven, it’d be fine. Or I guess if I wanted a cinnamon roll quickly and conveniently. So would I order this again? Yes, if I were at McDonald’s and in the mood for a Cinnamon Roll. It was good enough to order again.

All in all, the new breakfast items weren’t bad, but I’m not sure I’d order any of them for breakfast, except perhaps the muffin. Most of them I’d only order on a certain basis, like cravings or convenience. They do bring a lot more variety to the breakfast menu though, as before it really was just pancakes and egg sandwiches, so I’d say it was a good move on their part.

Although I wouldn’t be super excited to eat these for breakfast, I wouldn’t be upset either, and that’s all you can really ask from a fast food place that specializes in burgers and fries, isn’t it?